END_OF_DOCUMENT_TOKEN_TO_BE_REPLACED

Zilverstad has had a fascination with silver since 1875. This is reflected in their range of exclusive silver-plated gifts. A Zilverstad gift is a valuable collector's item for all ages.

END_OF_DOCUMENT_TOKEN_TO_BE_REPLACED 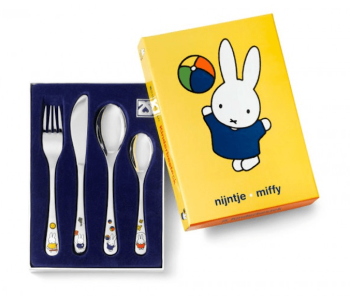 Inspired by the hugely popular cartoon figure Miffy by Dick Bruna, Zilverstad designed this timeless cutlery set, a unique gift for children. This children's gift consists of four cutlery items, each with the image of Miffy on its stem. Order the 4-piece Zilverstad Miffy Children's cutlery for a real collector's item that guarantees precious memories for the future.

This four-piece Miffy cutlery set by Zilverstad has as theme “Miffy plays”. On the frame parts are images of a playing Miffy on a step, with the kite, balls and skipping rope. The Miffy cutlery set consists of a fork, spoon, knife and dessert spoon. It is suitable for children from about 3 to 6 years and older. The cutlery set is made of 18/10 stainless steel, is dishwasher safe and comes in a yellow gift box with Miffy playing with a ball.

Miffy, the sweet and simple rabbit

The world famous rabbit Miffy has become an almost indispensable part of children's lives. All over the world, parents read the stories of everyone's favourite rabbit to their children. Miffy is characterized by simple shapes and primary colours, still able to communicate emotion and the sweetness and softness of this lovely rabbit.

was a Dutch author, artist, illustrator and graphic designer.The brain behind the world famous cartoon figure 'Miffy'. In 1955, while on a family holiday, he saw a rabbit hopping around and later made attempts to draw it, thereby creating "Nijntje" ("Miffy" in English), the word a Dutch child might use as the diminutive for "konijntje", "little rabbit". Bruna draws Miffy as a small rabbit drawn with heavy graphic lines, simple shapes and primary colours.  In the same year, the first of a series of children's books were published, which remains extremely popular to this day. Bruna died in his sleep in Utrecht on 16 February 2017 at the age of 89.

Bruna was best known for his children's books which he authored and illustrated, numbering over 200. His most notable creation was Miffy (Nijntje in the original Dutch), Aside from his prolific catalogue of children's books, Bruna also illustrated and designed book covers e.g. Zwarte Beertjes and Simenon’s Maigret, posters and promotional materials.

In his younger years, Bruna lived for a while in Paris, where he fell under the influence of Ferdinand Leger, Pablo Picasso and especially Henri Matisse.  Dick Bruna's first works were based on collages by that French painter. Bruna has also been noted to have been influenced by the Dutch graphic design movement, De Stijl, in particular, the work of architect Gerrit Rietveld.