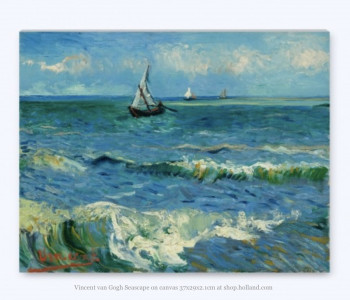 A Van Gogh on the wall? This canvas shows the painting Seascape by Vincent van Gogh in a format of 29 x 37 cm (h x w). Reproduced on the best quality linen on a wooden framework with guaranteed colourfast inks. Van Gogh painted Seascape on the spot on the beach, according to grains of sand found in the paint layers. He made this work in the fishing village of Les Saintes-Maries-de-la-Mer, during a trip that he undertook from Arles.

This canvas shows on a format of 29 x 37 cm (h x w) Seascape the painting by Vincent van Gogh. The masterpiece is reproduced on the best quality linen with inks whose colourfastness to 100 years is guaranteed, stretched on a wooden frame. Click here to see how the canvas is made.

Van Gogh painted this ' Seascape ' when he went from Arles with two canvases to the French fishing village of Saintes-Maries-de-la-Mer on the Mediterranean Sea. Van Gogh painted this seascape on the spot on the beach, according to grains of sand found in the paint layers. Despite the leeward wind during his visit, Van Gogh has put a beautiful seascape on canvas with beautiful white heads on the waves and an idyllic boat and what cheerful clouds in the bright blue sky.

Vincent van Gogh has bequeathed a huge amount of paintings. Fragments of a number of masterpieces have been used to decorate products like scarves, bags, glasses cases, vases, bicycle bells, umbrellas, puzzles and more. In our webshop, we have dedicated a whole subcategory to Vincent van Gogh items