END_OF_DOCUMENT_TOKEN_TO_BE_REPLACED

A prolific designer, with lots of ideas, a clear vision and a relentless drive to put Dutch design on the world map.

END_OF_DOCUMENT_TOKEN_TO_BE_REPLACED 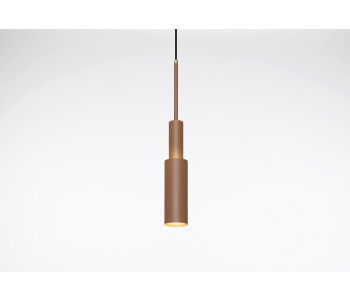 The Skylight Tower hanging lamps by Studio Frederik Roijé are made for the lovers of the city skylines. You can build your own skyline above your dining table with the three different Towers in five colors. The Tower One (2013) is the most compact model of the series, which is defined by the skinny and sleek shapes.

The Tower One (2013) is the middle model of the series of three Skylight Towers. The lamp is made of two metal cylinders. Together they measure 37 cm and a tip that sticks out 13 cm. The bottom cylinder has a diameter of 73mm like the other Towers.

To underline the effect of a Skyline even more, the light doesn't just shine down through the lowest, slightly bigger cylinder, but the light shines up through the smaller, longer cylinder. The Towers can be used by individually, but they are best used in a cluster of, for example, three to five pieces.

White and dark grey are the base colors in this series. Exclusively for the Tower Two in Brick Brown and Metal Blue. There is also a golden Skylight for a stylish accent.

World cities get their character from the towers, according to the designer Frederik Roijé. He was inspired for the Skylight Towers by the highest, most iconic, and futuristic buildings in the world. Provide your interior of your own characteristic skyline with one or more Skylights.

Build your own skyline

You can hang the lamps neatly next to each other, but playing with space and height differences also offers you beautiful skylines.

Fantastic to combine with the Table Tower Table lamps, by Frederik Roijé.