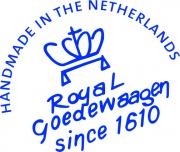 END_OF_DOCUMENT_TOKEN_TO_BE_REPLACED

Royal Goedewaagen is a typical Dutch earthenware manufacturer that has been making unique handmade ceramic products for over 400 years. This passion for ceramics is reflected in the most beautiful figurines, vases, plates and bowls.

END_OF_DOCUMENT_TOKEN_TO_BE_REPLACED 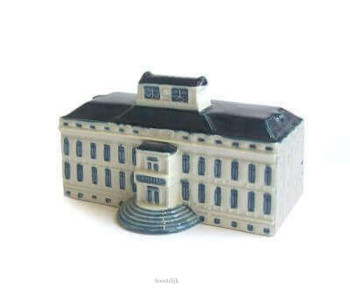 These beautiful ceramic miniature palaces from Royal Goedewaagen are a feast for the eyes. This is also the reason that Royal Goedewaagen is famous for its beautiful and detailed Delft blue miniatures. The many famous buildings and palaces in the Netherlands have now been immortalized in ceramics. This is the miniature of the Soestdijk Palace on the outskirts of Baarn, painted by hand in blue on a white base.

Description
Royal Goedewaagen has made beautiful Delft blue miniatures of almost all palaces in the Netherlands. Nice to save these miniatures or to give as a present, for people who love Holland.

Soestdijk Palace, decorated in blue on a white base. The miniature is made with the utmost care from the best clay and the most beautiful glaze. The miniature palace is hand painted and therefore unique. Soestdijk Palace was built in 1650 as a Hofstede and after 1674 it was converted into a hunting lodge and inhabited by the House of Orange at intervals. From 1937 it was the residence of Crown Princess and later Queen Juliana of the Netherlands and her husband Prince Bernhard of Lippe-Biesterfeld.

Ceramics is a collective name for products baked with clay. Ceramics have several advantages, such as being heat resistant and resistant to wear. In the time of the VOC, ceramics was an important trade source for the Netherlands. It was a major boost to the economy. This was also the time that the story of Royal Goedewaagen begins.

Royal Goedewaagen has been located in Nieuw-Buinen in Drenthe since 1984. However, the company has a long history. The story of Royal Goedewaagen starts in 1610, when the De Jong family from Gouda opened the popular pottery factory 'De Star'. This company eventually grew into Royal Goedewaagen, a company where quality, craftsmanship, perfection and creativity are of paramount importance. They successfully reflect these values ​​in the products in their range, they have been known for years as a leader in the field of ceramics.

Also take a look at the other products from Royal Goedewaagen. They also make beautiful vases, bowls and plates that are great as a gift to family or friends.
Product specifications
Reviews