END_OF_DOCUMENT_TOKEN_TO_BE_REPLACED

Our Dutch culture is rich when it comes to poetry. An excellent reason for Plint to introduce a larger audience to poetry and visual arts, making their days all the more fun.

END_OF_DOCUMENT_TOKEN_TO_BE_REPLACED 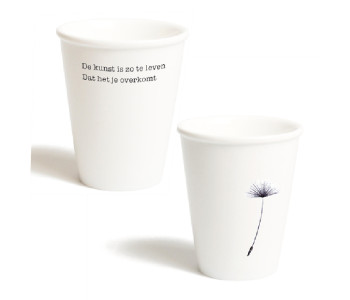 Get your day off to a good start? You can, with the Plint mug with poem from Martin Bril. With a long day ahead of you, there's nothing finer than a delicious cup of coffee or tea. Have your warm drink in this stylish mug with poem. The text will get you thinking and put a smile on your face. Don't hesitate, order the porcelain Plint mug for a good start to the day, every day.

The art is in living
So that you overcome it

Martin Bril is one of the most talked-about poets in the Netherlands. It is his mind that's behind the text on this beaker. He did not complete his philosophy studies, but he did successfully complete his subsequent studies, at the Dutch Film Academy in Amsterdam. After a difficult period in Martin's life, he picked up the thread again and became an icon in Dutch literature, winning awards such as the Bob Den Uyl prize in 2009.

Poetry at the table

The Plint mug with poem is part of the 'Poetry at the table collection. In this collection, the simplest of table elements is transformed into something special to stimulate thought and conversation. Philosophize with friends or family and be inspired by the poetry of Martin Bril/Kees Hermis

Are you impressed and inspired by this story, but this Plint mug is not quite what you're looking for? Take a look now, maybe there is something else in the Plint collection that is for you.

Add a little 'Plint poetry' to your life by giving this wooden party board as a gift to yourself or friends.