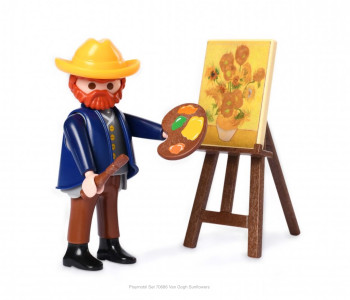 Get to know the most beautiful masterpieces from the Van Gogh Museum in a playful way. This Playmobil version of Vincent van Gogh painting Sunflowers is a must-have for every Playmobil enthusiast and all admirers of Van Gogh's work. Moreover, you can also play with this miniature version. The set consists of a 'Vincent van Gogh' Playmobil figure, a miniature easel, painting palette and of course the work Sunflowers.

May we introduce you to the miniature version of Vincent van Gogh's painting Sunflowers. Just stepped out of the Van Gogh Museum to enter the world of Playmobil. The set consists of a Playmobil figure of 'Vincent van Gogh', a miniature easel, painting palette and the work Sunflowers. With Van Gogh, art becomes a joyful child's play. An indispensable collector's item for all Playmobil and Van Gogh fans! Not suitable for children under three years of age due to choking hazard from small parts.