END_OF_DOCUMENT_TOKEN_TO_BE_REPLACED

Dutch Designer Pepe Heykoop (1984) founded his studio in Amsterdam directly after his graduation from the Design Academy Eindhoven in 2008. Pepe is mainly involved in handwritten and handmade designs and has a natural tendency to recycle objects.

END_OF_DOCUMENT_TOKEN_TO_BE_REPLACED 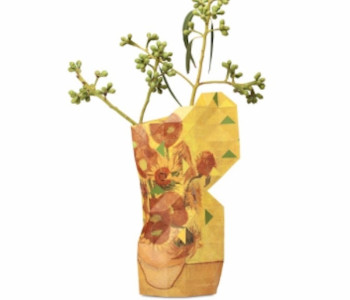 With the Paper Vase Cover Sunflowers from Pepe Heykoop you can make a contemporary designer vase. This paper vase cover, with a print of Van Gogh's Sunflowers, fits over almost any empty bottle. Thanks to the special pre-folded triangular structure you can create your own model. Also attractive as a composition with more than one paper vase modelled in different ways. A fair trade product with support from the Tiny Miracles Foundation which helps women in Mumbai, India to achieve financial independence.

The Paper Vase Cover is a folded paper vase, enabling you to instantly create a contemporary designer vase. This folded paper vase fits over almost any empty bottle. Thanks to the unique pre-folded triangular structure conceived by Pepe Heykoop, you can model the vase in various ways yourself. In various fresh colours and patterns. A fair trade product created by Dutch designer Pepe Heykoop and made in Mumbai, India, under the direction of the Tiny Miracles Foundation. The Paper Vase Cover was honoured with the Interior Innovation Award 2013 at the international design fair in Köln.

The sunflowers series consists of three different paintings with fifteen sunflowers in a vase and two with twelve sunflowers in a vase. Vincent van Gogh painted these works in 1888 and 1889 while living in Arles in southern France. The paintings were used by Paul Gauguin, a good friend of Van Gogh, to decorate his bedroom. Today, they can be found in five museums in as many countries. The Paper Vase Cover Sunflowers is based on the Vase with Fifteen Sunflowers exhibited at the Van Gogh Museum in Amsterdam.

The Paper Vase Cover is made from coated recycled paper and is delivered in an attractive envelope in the same material. The Paper Vase Cover doesn't get wet during use so it can be reused again. Available with prints of canal houses, Delft Blue, Van Gogh's Sunflowers and Almond Blossom, and Vermeer's Milkmaid. Paper Vase Covers are also available in white, black and silver and in 3 colours printed in a beautiful colour gradient: grey, green, and red.

The vase is hand-made by Indian women from the ‘Pardeshi’, a community of around 700 people who live on the streets of the red light district in Mumbai, India. The Dutch Tiny Miracles charity enables these women to become financially self-sufficient. The production of the Paper Vase Cover provides them with an opportunity. The Tiny Miracles Foundation's goal is to break the cycle of poverty for the whole community. An essential element of this is enabling the participants to become self-sufficient as quickly as possible. So they receive a decent wage and health care. In addition, the Foundation sends the children to an English school and organizes many fun activities.

Tip: an ideal gift to post through the letterbox!