END_OF_DOCUMENT_TOKEN_TO_BE_REPLACED

A flexible wall system, made up of printed square cards, designed to be attached using torque crosses. This is how IXXI makes art available to a wide audience.

END_OF_DOCUMENT_TOKEN_TO_BE_REPLACED 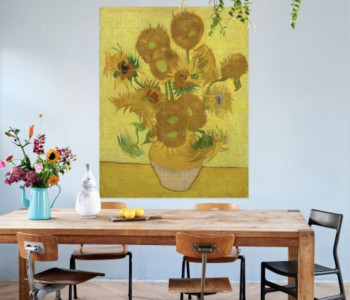 Attach your own Sunflowers by Vincent van Gogh to your wall. The IXXI wall decoration Sunflowers set consists of 20 torque crosses and printed square-shaped cards. Easy to set up and can be attached to a wall without using nails.

During 1888 and 1889, Vincent van Gogh lived in Arles, southern France. There, he made a series of five works with sunflowers. The paintings were used by Paul Gauguin, a good friend of Van Gogh, to decorate his bedroom. Today, they can be found in five museums in as many countries. This wall decoration is based on the vase with fifteen sunflowers exhibited in the Van Gogh Museum in Amsterdam.

IXXI comes as building kit in a compact box. The box contains 20 cards (Small) depicting parts of the Sunflower painting, torque crosses, and a suspension system. You can easily attach the IXXI with Van Gogh's Sunflowers to a wall.