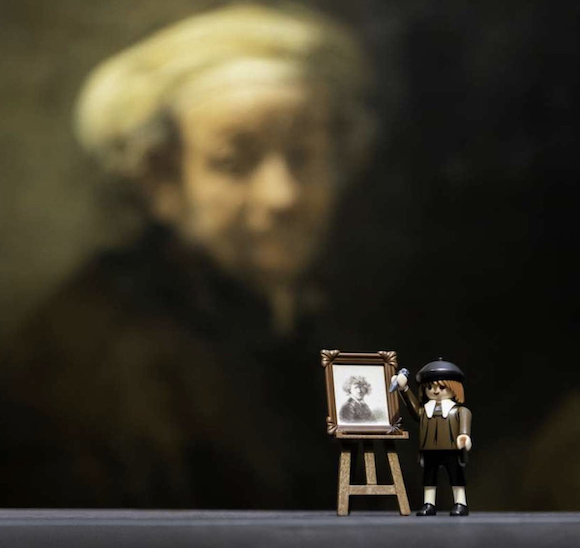 Inspired by the master

Rembrandt van Rijn (1606 - 1669) was a Dutch painter, etcher and draftsman and is seen as one of the greatest European etchers and as the most important Dutch master of the 17th century. Rembrandt painted about 300 paintings and 300 etchings and also made about 2000 drawings. He is generally seen as the master of playing with light. With sharp contrasts, he drew the audience in the performance on his canvas and brought dramatic scenes to life. The majority of Rembrandt's work, of course, is presented in his homeland in Het Rijksmuseum in Amsterdam, but his artworks can be found in leading museums all over the world.

Baroque in the style of Caravaggio

The many works by Rembrandt van Rijn belong to the Baroque, but also seem to be clearly mixed with a hint of Caravaggio. The Baroque is an art movement in Europe in which forms are excessive and a feeling is exaggerated and idealistic expressed. However, Rembrandt, like the great Italian painter Caravaggio, painted much more realistic and clear. His paintings show natural forms, colours and expressions.

In his lifetime, Rembrandt has delivered a great deal of high-quality work and his works of art - still 350 years after his death - are still widely discussed. The most famous paintings by Rembrandt are for many The Night Watch, The Jewish Bride and the painting by Marten and Oopjen won in 2018 the NOS News when the Netherlands together with France bought these two paintings by Rembrandt for 160 million.

Rembrandt in the Rijksmuseum

2019 is the year of Rembrandt & The Golden Age. Due to this theme year, the Rijksmuseum will be entirely dedicated to the great master Rembrandt van Rijn. Rembrandt died 350 years ago. On the occasion of the 350th anniversary, Het Rijksmuseum presents an extensive program with something to do and to see for everyone. The program starts on February 15, 2019. From that date, the largest overview exhibition of Rembrandt starts. The Rijksmuseum has never had so much work of this Dutch master in the house at the same time. Of course, this exhibition is present for a longer period of time and the program is being expanded considerably. More about all the activities and attractions around the year of Rembrandt you can follow closely in our blogs.

Gift tips and souvenirs in the style of Rembrandt

In the assortment of Holland Design & Gifts, you will find a gift selection and souvenirs based on Rembrandt's work including:

- Magnetic board The Night Watch 30x40cm

- and more to come

Holland Design & Gifts houses an assortment of more than 100 Dutch designers. They design under their own name or for well-known Dutch labels such as Droog Design, Functionals, Gispen and Goods and sometimes for foreign brands such as Hay and Alessi.