END_OF_DOCUMENT_TOKEN_TO_BE_REPLACED

This Dutch brand for gifts and home accessories made in developing countries seeks to help both disadvantaged producers and customers that want to buy fair trade products.

END_OF_DOCUMENT_TOKEN_TO_BE_REPLACED 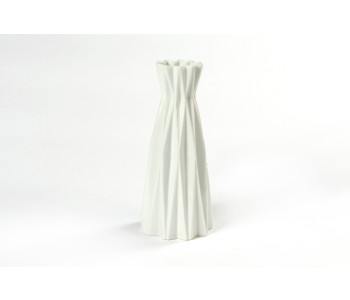 A folded vase? The FairForward Origami Vase S is inspired by origami folding techniques. This small designer vase of white ceramic has sleek folding lines, as if it were made out of paper. The small size of this fair trade vase makes it especially suitable for single flowers. A great addition to your home, especially in combination with its larger brother!

The FairForward Origami Vase S is a small, white vase with a narrow neck. Characteristic of this fair trade designer vase is the sleek folding lines as if the vase were made out of folded paper. In Thailand – where the Origami by FairForward is produced, origami is indeed popular. The producers stick to their roots! This fair trade vase is a great addition to your home, especially in combination with its larger brother.

FairForward designs fair trade gifts and home accessories under the Fair Trade Original brand. The Origami Vase S by FairForward is manufactured in a fair way and the Thai producers can actually make a living from their work. We invest in a sustainable future!

A long and happy life

The FairForward Origami vases are striking and elegant at the same time. The sleek lines and folded shape allow your living room to shine. The Origami Vase S is a small vase. It is 13 cm high and has a diameter of 5,5 cm. This designer vase is made of white ceramic and has a narrow neck. The Fair Trade Original Origami Vase S is, therefore, suitable for single flowers such as Roses of Gerberas. A large version of the Origami vase, 31 cm high and with a 19 cm diameter, is also available. This ceramic designer vase is a true style icon. Let’s hope that this vase has a long and happy life, just like the origami crane!