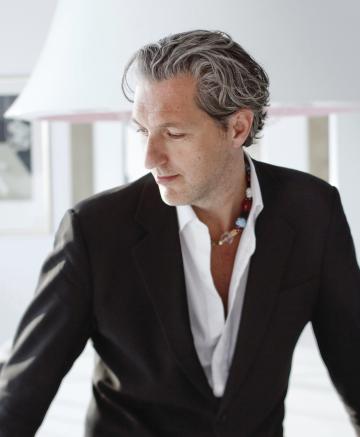 Everything about
Marcel Wanders

The Lady Gaga of design

Marcel Wanders (1963) has been called 'The Lady Gaga of design'. As the most famous contemporary Dutch industrial designer, he is both controversial and a visionary. His designs are conceptual in nature and based on basic historical shapes, which he continuously expands upon. Through the use of innovative materials and applications, ingenious designs emerge that are understood by any user.

Wanders took courses in Eindhoven, Arnhem, Maastricht and Hasselt. After he was expelled from the Design Academy in Eindhoven, he graduated cum laude from the University of the Arts (ArtEz in Arnhem) in 1988. His breakthrough on the world stage was ushered in with the design of the Knotted Chair in 1996. In collaboration with the Delft University of Technology, he developed a chair made of reinforced rope for Droog Design. This chair won the audience award at the Rotterdam Design Prize and is also included in the collection of the Museum of Modern Art, New York. Business Week included him among the 25 most prominent "leaders of change, while Elle awarded him the title of Designer of the Year in 2006. In 2009, Wanders also won the Collab award and Design Excellence Award from the Philadelphia Museum of Arts for his contributions to the field.

All this makes Wanders a pivotal figure in the international design world. The Marcel Wanders designer studio currently consists of 50 designers with international expertise. With more than 1,700 projects to his name, Marcel is one of the most prolific interior designers and art directors. His designs are developed for brands and labels including Alessi, Swarovski, Puma and Goods. Marcel Wanders is also the founder and art director of designer label Moooi (2001), represented in 79 countries. Moooi is known for its eccentric and inspiring view of our everyday utensils.

Marcel Wanders is turned off by the current design world of cold industrialism. According to him, the human touch should return to modern design. In this process, designer, craftsman and users come together to create holistic design solutions. Wanders is a versatile jack-of-all trades. A small selection from his range: Marcel Wanders tray by Alessi, the Alessi men's watch, the Goods candlestick Lucy and casserole by Alessi. From home accessories and utensils to decorative interior items; Wanders has it all!