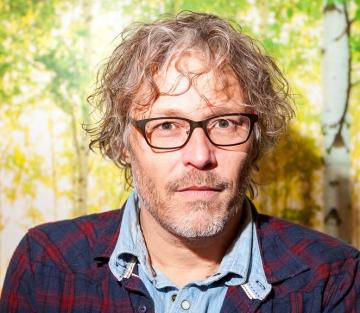 Everything about
Joop Steenkamer Jr.

Immediately after his graduated from the Industrial Designer course at the Technical University of Delft in 1992, Joop Steenkamer Jr. (1964) focused on his passion. Under the name Steenkamer Design (formerly Steenkamer Industrial Design and Product Development), he comes up with product ideas and guides the production process. Not just for the sake of bringing products to market, but rather to help solve people's problems with certain products.

In 1998 Joop Steenkamer Jr. makes his breakthrough with the Mirror Mirror spiegel van Goods. A compliment mirror that encourages you in several languages. Even now, this mirror of mirrors remains a bestseller. After Joop created the clap skate in 2002 as a cheer leading rattle for NOC*NSF, the product became a huge success. As many as 100,000 rattles were produced. In 2007 he was responsible for the interior of an innovative ambulance, the so-called New Style Ambulance. Thanks to his design, the patient's ride in an ambulance is experienced as much more pleasant. Through his experiences in a traffic accident with spinal cord injuries as a result (1990), he became more motivated to create this specific ambulance design.

Steenkamer Design is extremely versatile in its production. Besides industrial designs, this studio also provide logo design, branding, printing, lettering, cover design and photograph manipulation and illustrations or embellishment services. Joop Steenkamer Jr. has been nominated for many awards over the years. He received a honorable mention at the Wim Rietveld incentive prize for restyling a flashlight in 1998 and a mention at the Award New Material Applications at the Ministry of Economic Affairs in 1989. Steenmaker also has an entrepreneurial spirit. He was involved in the Sunny Days label and the founding of Interior Tools. Since 2012, Joop is a curator at the Paskamer museum.