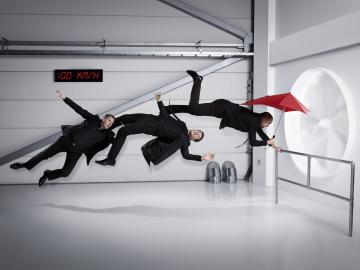 Everything about
Gerwin Hoogendoorn

When Gerwin Hoogendoorn was a student at TU Delft and looking for a graduation project to complete his Industrial Design and Engineering studies, he didn't have much luck. His umbrella failed him a total of three times in one week in his attempts to defy the harsh weather. This eventually leading to the idea for Senz was a blessing in disguise.

Improvement of the umbrella

The fact that over 3400 years, little had changed with regard to the initial umbrella design was something that bothered him, and he decided to focus his graduation project on the development of a storm-proof umbrella. Two classmates, Gerald Kool and Philip Hess were initially sceptical , but not much later 'came to their senses' and became his partners.

Despite not having any business experience at the time, Gerwin Hoogendoorn realised the potential of his design. Together with his two classmates, he decided to start a small business, Senz Umbrellas. Since then, the Senz umbrellas have become a great success and Gerwin Hoogendoorn continues to innovate in his umbrella designs.