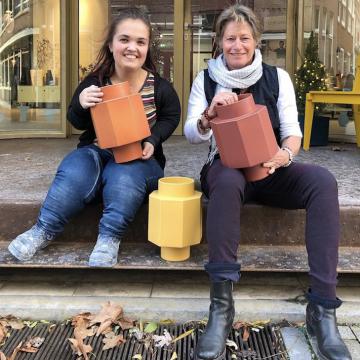 Everything about
Geke Lensink

Geke Lensink (1963) graduated from the art academy ArtEZ, after which she independently designed exhibitions, interiors and stands for many clients. In 2008 she radically changed course and decided to design furniture and crockery. From her studio in Amsterdam, Geke Lensink now works for various brands such as Heinen Delfts Blauw, Cor Unum, Brothers and Sons, Prodinter. She is also working on her own Souvenir collection.

Her mission is to start all over again with contemporary knowledge instead of continuing to evolve. Geke Lensink's work is characterized by sturdy shapes with a minimalist character.

In April 2019, Geke Lensink presented the first designs of her new Souvenir collection in Milan. The first designs, including minimalist stools, benches in various designs, a coffee table, vases, and crockery, form a close-knit family. According to Lensink, the products form a logical unit because they originate from the same source. The memories she has of her travels and her encounter with other cultures are at the core of all Souvenir products, Lensink explains.

She takes home the wonder of an archetypal design language, the beauty of specific colors, characteristic patterns and a characteristic material finish. There Lensink converts the memories into new aesthetic designs, which have no unambiguous origin. After all, a wooden stool isn't typically Japanese because it's minimalist, and a ceramic plate isn't exactly Moroccan because of the pattern used, she explains. The collection has thus become the reflection of fused memories and the designer's vision, and perhaps also a reflection of an increasingly global society.