END_OF_DOCUMENT_TOKEN_TO_BE_REPLACED

Miriam Hagoort and Marjolein Peters share a passion for the beauty of the city and graphic structures. These scarves with city plans and patterns are the result!

END_OF_DOCUMENT_TOKEN_TO_BE_REPLACED 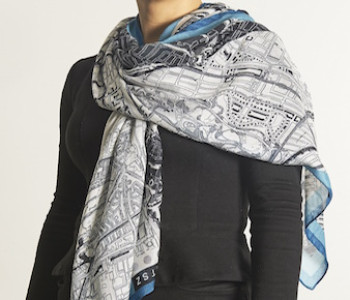 With the City scarves from Barentsz Urban Fabric, you can truly show off your love of Holland, Amsterdam, Rotterdam or The Hague! This Black and White designer scarves combine the beautiful outlines of the map with the artistic patterns of canals among others. The coloured border offers this design scarf a subtle accent. You receive the shawl in a beautiful gift wrapping, complete with a set of pins to pin on the places that are important to you!

The City scarfs from Barentsz Urban Fabric show the beauty of the landscape of the Netherlands through its patterns and structures. All scarves have a geographical map of either The Netherlands or Amsterdam, Rotterdam and The Hague with graphical lines of other boat connections and waterways.

The City scarves are developed and designed by Dutch visual artist Mirjam Hagoort and urban designer Marjolein Peters. They combine their shared passion for the beauty of the city and graphical structures at Barentsz Urban Fabric. The duo was inspired by the maps of The Netherlands and its cities. They discovered patterns in the map with an artistic character. The geographic outlines and the graphic lines result in a high-end design scarf of voile cotton, imprinted with a black-white map and a coloured border.

A scarf with subtle colour accents

The design scarves from Barentsz Urban Fabric come in black-white with subtle colour accents. The diapositive contrast emphasizes the beautiful patterns of the boat connections and waterways. The City scarf Amsterdam North-South Medium (50x128cm/20x50inch), Amsterdam North-South Large (65x170cm/25x67inch), The Hague Large (70x170cm/27x67inch), Rotterdam (60x160cm/23x62inch) and Holland (50x160cm/20x62inch) is rectangular and have a colored border. Besides the geographical shapes, the City scarf also provides additional information by using graphic elements. The Barentsz Urban Fabric scarf Amsterdam also comes in a squared version (90x90cm/35x35inch) with a depiction of Holland on it.

You will receive the scarf in a beautiful gift wrapping, complete with a set of pins to pin on the places that are important to you! The city is yours! Wear it. Share it!