END_OF_DOCUMENT_TOKEN_TO_BE_REPLACED

Exclusive books on art, photography, interior design, outdoors, design, fashion, and gastronomy: TerraLanno has what you're looking for.

END_OF_DOCUMENT_TOKEN_TO_BE_REPLACED 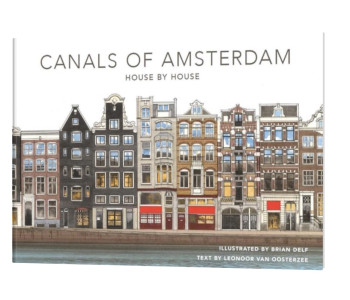 Canals of Amsterdam - House by House

Brian Delf has been drawing every building along the canals of Amsterdam for over ten years. The architecture, the materials, the small architectural details - nothing escaped his attention. His drawings accentuate the unparalleled beauty of the canal houses. Naturally, the four main canals - Singel, Herengracht, Keizersgracht and Prinsengracht - can be admired in this publication. As a bonus, the smaller Brouwersgracht is also included in full color. Outstanding buildings and architects and notable residents are brought to life through illustration and text.

Brian Delf illustrated many atlases and guides that have received international acclaim, such as The Picture Atlas of The World and Great Events that Changed the World. Leonoor van Oosterzee is an art historian with a special interest in drawings and urban history. Together with Bert Gerlagh she also wrote Along Amsterdam Canals.