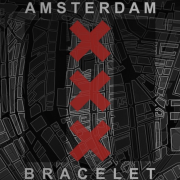 Do you enjoy Amsterdam then this Amsterdam bracelet is right for you. Made of black coated steel from which the three Amsterdam crosses are cut out. Apart from this Amsterdam Bracelet Large for wrists with a circumference of 17,5 cm and up, there are also sizes S and M available. With your purchase, you also support you the Emma Children's Hospital in Amsterdam.

The bracelet is made of black steel where the 3 crosses are cut out. The Amsterdam bracelet is gender neutral and available in three sizes S, M and L. This Large bracelet has a diameter of 6,8 cm for wrists of 17,5 cm circumference and up. You can customize the size a bit further: squeeze the bracelet gently when wearing it.